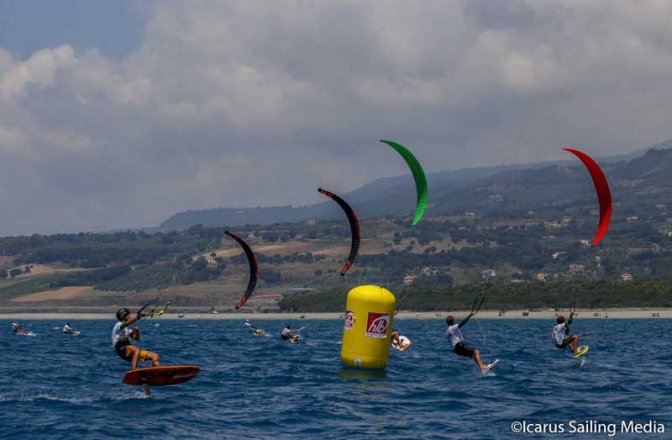 Monegasque Maxime Nocher sealed his victory in the KiteFoil GoldCup in Italy with a virtually unrivalled demonstration of speed, power and flawless technique that left the chasing pack peering at his back in the distance for much of the competition.

The reigning Formula kite world champion’s sheer pace and extreme angles sailed upwind and downwind ensured he snatched four bullets from the top "gold" fleet’s five races on the final day of four at the engrossing contest in southern Italy.

Nocher was so dominant, especially in "gold" fleet’s racing in the perfect 9kts to 12kts of thermal Mediterranean breeze, that he had an unassailable lead with two races still to play out on the windward-leeward track just off a packed Hang Loose Beach.

Almost immediately Nocher turned his attentions to the next round of the four-stop KiteFoil GoldCup world tour in San Francisco at the end of the month, where he knows the competition will be even tougher with Nico Parlier (FRA) and Johnny Heineken (USA) both slated to race.

"Right now I’m really pleased with the win here," said Nocher, as he came ashore after the last race. "I’m looking forward to San Francisco. If I can win again there I’ll win the whole GoldCup. I think Nico Parlier will be there and the Americans, so it’ll be tough. But that’s good."

The KiteFoil GoldCup’s latest stop — following the first in La Ventana, Mexico — also offered up some new equipment twists in the lightly-regulated "open" class. In Nocher’s hands the Taaroa Sword2 with new wings proved as quick as ever, while his F-one Diablo foil Foil #foil kite showed itself as formidable as the relatively recent Flysurfer Sonic FR. But Levitaz’s new Aspect Bionic hydrofoil also emerged as a force to be reckoned with.

Despite Nocher’s emphatic win through his display of unmatched consistency, the young French rider Axel Mazella — who took the second podium spot — and compatriot Julien Kerneur gave him a run for his money, both snapping at his heels and on occasion overhauling him in the nip-and-tuck battles on the smooth waters.

Mazella, 17, riding a Taaroa Sword2 with developmental wings and an Elf Joker foil Foil #foil kite, realised he had his work cut out for him because of Nocher’s speed around the course. In the last race he got a slice of luck when Nocher caught a plastic bag in the water and had to jump to clear it, but then the same misfortune befell him later in the race.

"Maxime [Nocher] is just very, very fast," said Mazella, who also took the Under 21 title. "I might be a bit quicker, but he is fast with better angles.

Kerneur, riding a 15m Paraavis GVX foil kite and a Taaroa Sword2 hydrofoil, went one better than his fellow countryman grabbing a bullet in a split-second photo-finish at the expense of Nocher in the day’s third race.

Mazella also lost out to Kerneur in the fourth race of the day when he crashed during a thrilling drag race to the finish line, slipping two places in the process.

The "gold" fleet’s two-lap course, typically completed by the winners in 12 minutes and 30 seconds, saw a number of riders start on a port tack to take advantage of the lift near the beach on the right side of the track.

But the tactic ensured most had to give way to the starboard riders and duck beneath the pack, many of whom tacked at the first possible opportunity to gain the same right-hand side advantage.

Benni Boelli (GER), riding a Flysurfer Sonic FR kite and Levitaz Aspect Bionic hydrofoil, used the right side of the course well often showing the same blistering pace as the top riders. His performances on the third day, the first of "gold" fleet racing, helped earn him a fourth place in the overall standings.

In the alternate "silver" fleet, also made up of 24 riders, North Kiteboarding rider Steph Bridge (GBR) came top for the women with a series of solid third places on the final day, just outpointing Airush’s Alexia Fancelli (FRA), who was the second woman and fifth overall in the fleet and Russia’s Elena Kalinina third and seventh respectively. 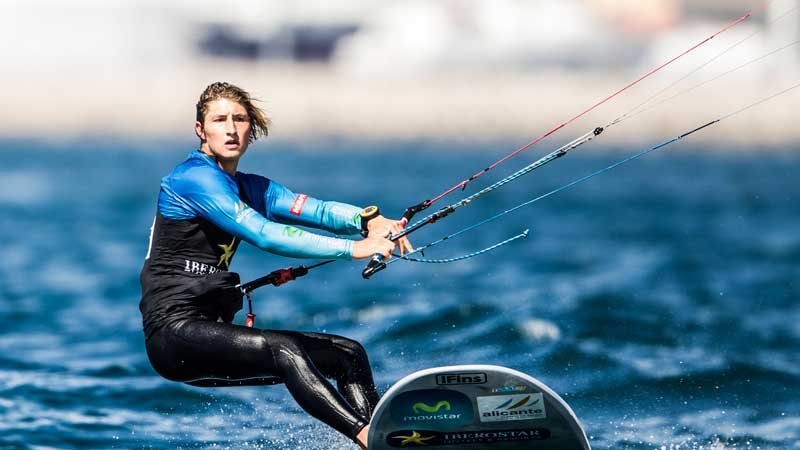