Easy wins for Esimit Europa 2 in the Maxi division 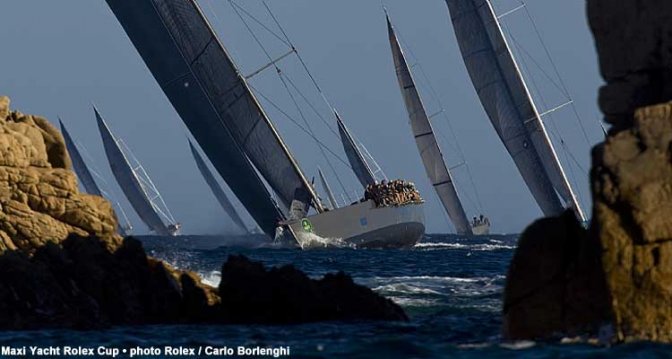 The final day of the 2010 Maxi Yacht Rolex Cup has proved every bit as fascinating as the previous days. But what would one expect with forty-nine of the world’s biggest sailing yachts racing off the stunning Sardinian coast in bright sunshine and on azure blue waters. Today was the day to determine the winners and losers at the year’s premier exposition Exposition #Exposition of inshore maxi yacht racing. For those ending the day on the podium an array of trophies and prizes awaited, including the coveted Rolex Yacht-Master chronometers.

This year’s maxi aces are : Igor Simcic and Esimit Europa 2 (SLO) in Maxi, Claus Peter Offen and Y3K (GER) in Wally ; John Williams and Ranger (CAY) in the J-Class ; Otto Happel and Hetairos (CAY) in Supermaxi ; whilst at the inaugural Mini Maxi Rolex Worlds, Niklas Zennstrom and Rán (GBR) took pole overall, and, Brian Benjamin and Aegir (GBR) struck gold amongst the Racer/Cruisers.

Before the prize-winners could be formally declared there was the small detail of today’s competition that needed to be resolved. The Mini Maxis were set two windward-leeward races of 8.8 and 8 nautical miles in distance. The classes for the larger contestants were sent on a 35nm challenge that took them to pastures new, certainly for this week.

Winds were by no means settled and nor was the sea-state. The swell leftover from the southeasterly earlier in the week was being buffeting by more northerly winds. Two metres of lump and bump greeted the yachts, with 15–16 knots of near-northerly. The wind swung about during the day, with persisting southward shift to end up from the northwest.

The entertaining quest for navigators and strategists in the Maxi, Wally and Supermaxi classes was as follows ; short beat to a laid windward mark ; shallow dive into the channel to a mark in the Golfo di Saline (avoiding Isola delle Bisce and Secca di Tre Monti by leaving both sufficiently to starboard) ; an upwind scoot to the faithful rocks of Monaci, before a headlong downwind descent south to Mortoriotto and the novelty of a circumnavigation of the island chain formed by Mortorio and Soffi ; finally, head north and upwind to the finish off Porto Cervo.

And so to the real story of the day : the biggest shoot out with the most surprising outcome was in the Mini Maxi Rolex Worlds where the Judel/Vrolijk designed seventy-two footer Rán put her troubles of yesterday to one side to score two bullets to steal the world championship from under the nose of Andres Soriano’s Alegre (GBR), which had led the series from day one.

The first hour-long race was relatively straightforward. Rán winning by over a minute on corrected time from Hap Fauth’s Bella Mente (USA). Significantly, Alegre were down in fourth. The pressure had piled on good and proper. A four-point lead over a supposedly wounded opponent had reduced to just one. The north wind appeared to be looking after its own.

The second race start was a boiling kettle by comparison : a huge left-shift, boats over early and an apparent massive pin-end bias all culminated in an abandonment before the windward mark. Deep breath all round, before trying a second time.

Rán had a game plan, which took some nerve to maintain, according to her stand-in strategist, Olympic medallist, Thierry Peponnet, “on the second race we wanted to be to leeward of our opponents because we expected the wind to go left. At the start there was a right shift, which did not help us. It did go left eventually, but very late and only once we were at the top mark. Shockwave was in front at this point doing a very good job. Downwind, fortunately, we were very fast. I was really impressed by the boat speed.”

For Zennstrom the result is a dream come true after a less than simple week, “today I am very, very proud of the team. It has been hard, we had a dreadful start on the very first day, we lost (strategist) Tim Powell through a land-based injury and then hit a rock. It has been a struggle.” But struggles are what make life interesting, sorting the men from the boys, presenting challenges that must be risen to.

Zennstrom described the scenario, “before yesterday, we were behind by only one point. It went pear-shape when we hit the rock and had to pull out. We knew it was still possible to win, but only if we won both races and Alegre had two poor races.” Rán’s physical shape was uncertain. There was no where to lift the yacht last night and properly check the damage, so there was some finger-crossing onboard the largely British crewed boat, “we didn’t know this morning if the keel would stay on and it was quite a lumpy sea. We made the decision that if we heard anything we would bear away quickly. Before the start we sailed upwind, hit a few big waves and thought ‘the keel is still hanging on so lets still go for it’.” Good job too, in the eventual circumstances.

Brian Benjamin was sailing his last races on Aegir today, with a new 82-foot yacht nearing completion in Newport, Rhode Island, so he was thoroughly impressed to have won the battle of the Racer/Cruisers in the Mini Maxi Rolex Worlds fleet, “we had a very good week : the boat sailed well, the crew was fantastic, we had lots of problems all week, but we just overcame them. We’ll be back with the new boat. Our first mission in Europe (next year) will be the Giraglia Rolex Cup, then Maxi Yacht Rolex Cup, and finally Rolex Middle Sea Race.”

With both Rán and Aegir named after Viking gods ; gods that actually were married according to legend, there is reasonable cause to think that both winners in the Mini Maxi had something extra on their team.

In the Maxi division, Esimit Europa 2 had done enough not to have to race today. With a discard coming into play if five races were conducted, Esimit was unbeatable and with two big tests still to come this season – La Barcolana and the 606 nm Rolex Middle Sea Race, expediency won the day. Simcic was understandably delighted with the overall result, “our rating is very big, we have to arrive very far ahead of the second boat to win on corrected time. This is not easy in all conditions, but we got three first places and one second place. This means that not just is the boat very fast, but the team is very good.”

For a project that took off just a few months ago, Simcic and his crew have come a long way. Simcic is well aware of that and the win this week is icing on the perfectly rising cake, “this boat is very complex, with a high level of technology, so we are learning everyday and we have come a long way since the Giraglia Rolex Cup in June. Right now I feel very good. I have great confidence in both my crew and skipper Flavio Favini.”

The Wallys were led home for the second year in a row by Y3K. Claus Peter Offen’s crew have sailed consistently well this week and whilst the maths suggested they could lose today on count-back if Magic Carpet 2 had won, Y3K would have needed a shocker of a result. As it was, Y3K put the issue beyond doubt winning the race from the front. Offen expressed his huge satisfaction, post racing, “it’s our third win at the Maxi Yacht Rolex Cup and the second time in a row. It is really a great feeling, even more since it is with our new boat. So, of course, we are coming again next year to try to make it a triple win ! This will not be easy, since the level of the Wally fleet is very strong, especially this year. This makes it even more interesting and so the win counts for even more.”

Hetairos took the Supermaxi class after a second place today. Apart from a sixth in the first race, which could be dropped with today’s result, Hetairos has been all but unstoppable scoring two firsts and two seconds. Owner, Otto Happel, has participated at the Maxi Yacht Rolex Cup a number of times before and really enjoyed the contest, “we had a great week with good breeze most days which is extraordinary and much better than previous years. There were forty-nine boats, which we have never had before, so it was a lot of fun to have that kind of competition.”

In the J Class battle, Ranger put the issue beyond doubt pretty much from day one. The only blip on the otherwise horizon of perfection was a second in race four, which was discarded. John Williams has been in this position before at the Maxi Yacht Rolex Cup and was no less impressed that the first time he won, “when you have just four-points you cannot do any better than that. The boat was great and we never made a tactical or mechanical mistake. When you sail perfectly and you have a great crew you expect to do well.” Williams plans further campaigns in the J-Class and is looking to the future even whilst the dust settles on his latest victory, “we continue to make little tweaks to the boat, to improve it, to make it a little bit better, which is our goal and something you have to do. We’ve already got lists to work on for the next four or five months !” 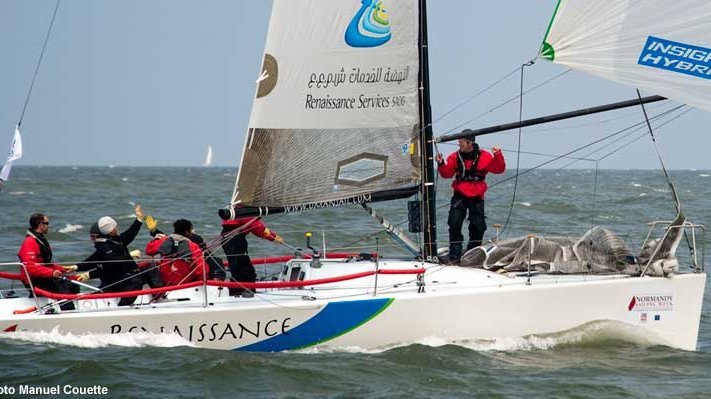 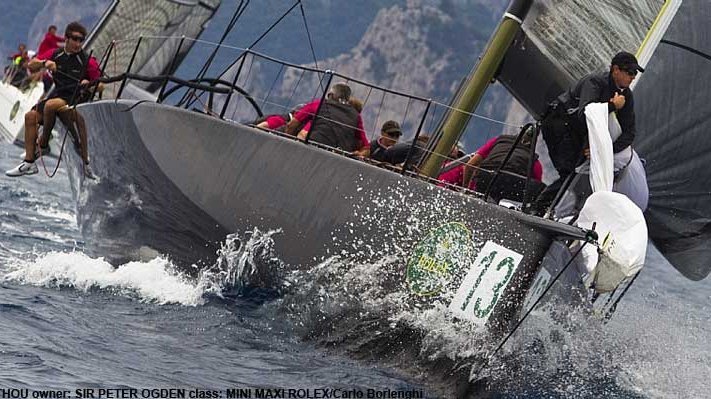 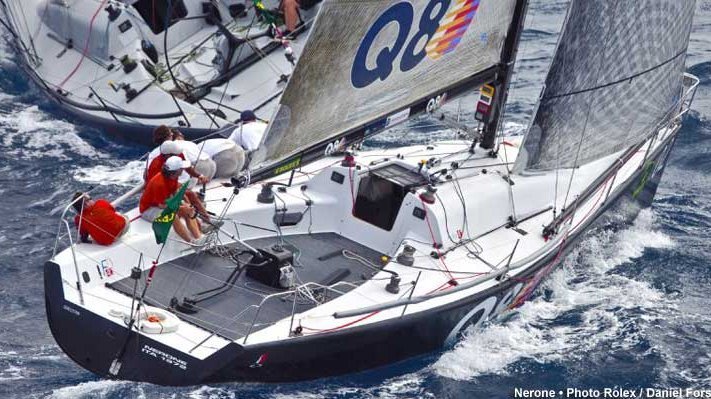 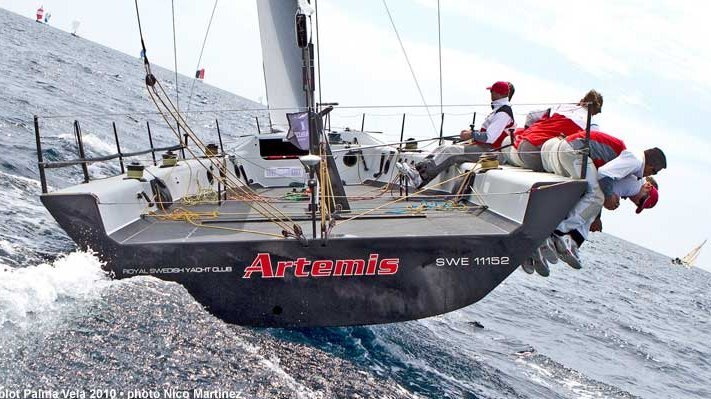