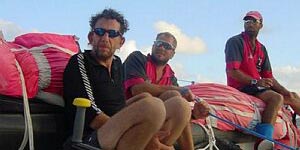 Jean Yves Bernot, Arve Roass and Grant Wharington sporting the unshaven look. It’s possible to see that we have been out sailing for a while. Onboard photo / djuice team.
No other team relies so heavily on French sailing expertise. World-renowned weather router and navigator Jean Yves Bernot plots the boat’s course, while Thomas Coville and Jaques Vincent support the team with trimming and driving. Building 25% of the total crew of 12, they a major force on deck of the pink yacht.

Djuice’s approach is similar to other sports, like cycling or short track skating, where the top contenders stay in the middle of the pack until the final assault shortly before the finish. Not to mention that a third of the crew is Australian and must think about their fellow countryman who claimed Australia’s first Olympic winter gold.

The jump into second started to unfold yesterday evening, when neither Tyco nor ASSA ABLOY covered the djuice dragons when they moved away from the fleet towards land. There they found a gentle north-easterly breeze when everybody else struggled in no wind at all. Djuice’s navigator, Jean Yves Bernot commented on this decision after stepping off the yacht he has been on for more than three weeks : "As there was no wind offshore, we had to try inshore. Even though there were some discussions on board."

This second placing is djuice’s first top three result and will add a lot to their confidence in the ability of the Davidson designed boat, as well as in the team.

Two days ago Knut Frostad wrote, when lying in fifth position : "As the results from the winter Olympics are ticking in, and I proudly see that Norway is second overall, it makes me even more motivated to give everything we can on the last miles left. Hold your breath..."

VOLVO OCEAN RACE / Leg 4 : The pain of thawing out