High Fives For illbruck in Rio 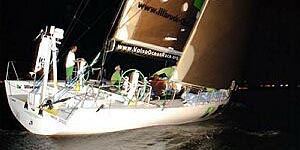 Photo Rick Thomlinson
John Kostecki deserved to win this leg perhaps more than any other - it is hard to see where they put a foot wrong. And yet at one point a couple of days ago in the fickle wind conditions off the Brazilian coast, it looked as though victory could be cruelly snatched away from them. They led all the way up the South American coast, always the hunted. Now finally they can breath a sigh as they crossed the finish line at 0258 local time (0558.42 GMT). After 23 days, 5 hours, 58 minutes and 42 seconds.

When stepping ashore Kostecki said : "Being overtaken before finishing would have been devastating for us after sailing the leg so well. It happened to us before finishing in Hobart and it could have easily happened here as well." When asked for the recipe for winning he continued : "It’s because we have the best team !"

During the final approach to the finish line, the current was setting against them in virtually no wind. When the huge Code 0 sail couldn’t fill any more, the crew changed for a smaller headsail that develops less drag in the light air.

In the hot night, spectators are lining up to the sounds of a Samba band playing on the shore.

illbruck will be relieved to have evaded that uncertainty and to have extended their points margin on the rest of the fleet. Even better for them, djuice’s break for the shore away from the other three boats vying for second place appears to be paying off. If Knut Frostad’s decision to split from the pack earns him the runner-up spot here, not only will it help ease some of the pressure from his shoulders, it will put crucial points between illbruck and Amer Sports One.

VOLVO OCEAN RACE / Leg 4 : The pain of thawing out