SEB arrives in Punta Arenas to be shipped to Rio 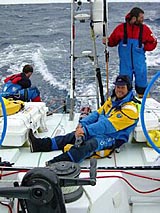 News’ Corp new helm. Onboard photo.
Depression, stress and exhaustion are likely to be setting in for some of the crews of the Volvo Ocean Race, along with the ups and downs and day to day grind of yacht racing. The highs are extreme and can provide an adrenaline buzz second to none and the lows can be the worst thing that has ever happened to you in your life at that particular point in time. Not life threatening, but when you are tired and physically drained, the lows appear to be far more significant. Any number of events can affect your well being, from place changing to more tangible difficulties such as losing rigs and rudders.

For News Corp their worst nightmare has come true. They reported the loss of their rudder at 2030 GMT on February 14 about 1200 miles from the finish line in Rio de Janeiro, in a very short message :

"At the time the boat was sailing at speeds of up to 22 knots on a shy spinnaker reach with full mainsail, when all of a sudden the rudder sheered off below the hull. There was no other damage, than a blown out spinnaker. There are no injuries."

There is no apparent cause for the failure, but hitting the ice in the Southern Ocean may have contributed to the failure. Obviously the crew of Team News Corp is very disappointed particularly as they were in line to charge into third place with the increased pressure from the west. With the forecast weather, Team News Corp expects to be in Rio within eight days. "Team News Corp is continuing to race and is pushing the boat as hard as possible" reported Ross Field.

This is a devastating blow to the crew of News Corp, following their collision with an iceberg in the Southern Ocean on February 5. They led out of Auckland at the start of the leg and after they had hit the iceberg, reported that they had suffered rig damage. Following immediate repairs, undertaken in the harsh seas of the Southern Ocean, they managed to work their way back to third position just before rounding Cape Horn, and since then have worked hard through every change in wind direction or speed to claw back from the inevitable knocks and place changing up the South American coast.

SEB have also suffered during this leg, when they lost their mast in the ruthless Southern Ocean on February 7. Since then they have been slowly making their way to Punta Arenas in Chile under jury rig and arrived just after noon GMT today. Gurra Krantz, skipper of SEB sent a short message to officially retire from leg 4 as the V.O.60 will now have to make its way in its cradle on a cargo ship, to Rio de Janeiro. She was also forced to retire in leg three, following the loss of her rudder and this will therefore be a double blow to all the sailing crew and shore team for SEB.

At the end of the official notification, Gurra poignantly added, "It was not easy to press the send button on this msg." For now it is over to the shore team, to repair the damage and get the boat ready for the ship to head for Rio tomorrow. The new mast, which Team SEB has had stored in Gothenburg, will be air freighted to meet the boat once it has arrived in Rio. For the sailing crew, it will be an easier journey ; they are due to fly to Rio on Sunday. It will be even more disappointing for the "would be" first timers, who have missed out on the rounding of Cape Horn. SEB has arrived this morning in Punta Arenas in the Magellan Strait.

Meanwhile the game of tactical snakes and ladders is still going on for the rest of the fleet. Minimise the loss and maximise the gain. Weather systems, fronts and large areas of calm can all play their part in adding to the level of mental pressure for the navigators and tacticians. Their role can be a thankless task when the chips are down. Paul Cayard summed it up from Amer Sports One, „If it [the patch of calm] had squatted on illbruck we would have had a restart. It seems like it landed on Tyco and us the most, so illbruck has sprung further ahead."

These situations tend to provide a feeling of sheer frustration and total desperation and he continued, "When you are becalmed, you work your ass off, believe it or not. You change sails, stack and unstack, look for breeze by sending guys up the rig...it is not an idle time. It is a desperate time. You know you are losing to someone at the rate of 14 miles per hour. You have to find a way out and most of the time there is nothing you can do but wait for Mother Nature to take her course." Further difficulties with the currents and tidal streams have marred their recent performance as well, "We have the tail of the Brazilian Current converging here with the Falklands Current...bad stuff happens here all the time."

It is a nail biting time for the entire fleet, as the wind patterns change and change again and places are won and lost within just a few hours. Things are not necessarily that easy for the race leader illbruck, who is constantly looking over her shoulder, worried that one small mistake could allow the other boats to catch and pass her. A few days ago, Mark Christensen, nervously wrote, " 45 mile lead. Is it enough ? Only time will tell."

For Tyco and ASSA ABLOY, the gains and losses have given them an anxious time too and no doubt this will continue right up to the finish line. Their attention is concentrated on every small detail ; the immediate goal for Tyco is to try and hold onto second position and for ASSA ABLOY to try and get ahead of djuice. djuice will see the flip side of this and will be fighting hard to stay ahead of ASSA ABLOY.

For Lisa McDonald and her crew on Amer Sports Too the urge to gain every additional boat length on the fleet will be their main driving force. They will be trying to assess and gain on every single opportunity presented to them and to maximise the benefit of hindsight from earlier decisions taken by the rest of the fleet. In some respects this might appear easier than it actually is ; there is an expectation that hindsight makes the decision for you and that Amer Sports Too should constantly pull back distance. Not an easy task.

Guillermo Altadill, Spanish crew member on board ASSA ABLOY has been honored with an important award, Best Sportsman Year 2001, that will be handed out at a gala ceremony tonight in Barcelona, during the "Nit de la Vela" ("Night of Sail").The award is given by the Catalonian Sailing Federation and one of the former winners of this award was the king of Spain, Juan Carlos I. This is a great recognition for Guillermo’s long career that includes successful participation in four Olympic Games, several speed records, 14 Atlantic crossings and more than 200.000 nautical miles sailed in competition. "I’m very happy for this award. To know that the struggle in so many competitions is recognized by your peers really makes a difference," commented Guillermo by phone when he received the good news.