Marc Thiercelin signs for his second Around Alone

Clipper Ventures, Around Alone 2002-03 race organisers, announced that renowned French skipper, Marc Thiercelin, has registered his entry into the Open 60 class for the 20th anniversary of this historic, solo, round the world yacht race. Thiercelin is the 9th skipper and 3rd Frenchman to sign up in Class I for the 6th edition of Around Alone, which departs from Newport R.I., in the USA, and stops over in Europe for the first time ever.

Thiercelin, a skipper and artist by trade, is on his second consecutive attempt to win the Around Alone. In the 1998/9 race, on board his Open 60 ’Somewhere’, Marc dominated the lead during the first 3 legs, only to be pipped at the post by Golding & Soldini for the top spot. He even broke the world 24hr distance record Record #sailingrecord , with a 396.5m run during the 3rd leg in the Southern Ocean. After rounding Cape Horn in 1st place, he dismasted in 40kt headwinds and turbulent seas off the Falkland Islands. However, he fitted a new mast in port, and still finished 2nd overall behind Italian victor, Giovanni Soldini in ’FILA’.

Race Chairman Sir Robin Knox-Johnston was excited to confirm Thiercelin’s entry into Around Alone : "We are delighted that Marc has decided to enter Around Alone again. Marc is a tough and dedicated racer as his performance in the last race showed. His entry effectively throws down the gauntlet for the best of the world’s single-handed sailors to the coveted crown of solo competition."

Thiercelin himself is highly motivated second time round : "I am definitely going to be back on the start line for the Around Alone. There’s no other ultimate challenge short of a solo RTW yacht race and Around Alone is unique for its length, its rhythm between land and sea, and the ability for people the world over to experience first-hand the event from the inside. I’m working hard, both in France and abroad, to secure the sponsorship in order to purchase a competitive Open 60 to win the race."

Around Alone has made heroes out of its victors, and a Frenchman has won this event four times out of five. Vendée Globe founder Philippe Jeantot, won the 1982/3 and 1986/7 editions. Another legendary French skipper, Christophe Auguin, was also a double victor in 1990/1 and 1994/5. Thiercelin is also counted in solo sailing’s hall of fame among only 5 skippers to achieve a ranking in three solo RTW yacht races, after finishing 2nd in the 1996/7 and 4th in the 2000/1 editions of the solo, non-stop, RTW Vendée Globe yacht race. Will there be a Briton in the Around Alone 2002-03 to challenge this French supremacy ? 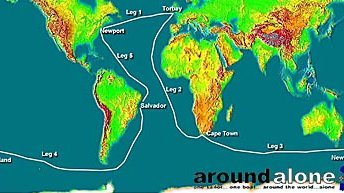