The Kiwi sailor wants to enter in the Mini 2003 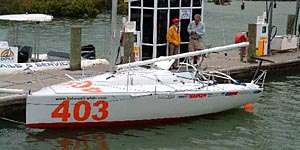 Chirs Sayer did finished third of the Mini-Transat Mini-Transat #MiniTransat 1999, just behind Sébastien Magnen (double winner and yacht designer) and Pierre-Yves Moreau. Now, he is going to be back in France to enter again in the single handed transatlantic race from La Rochelle to Brazil which will start in september 2003. With his new mini and his great experience, no doubt he will be between the favourite skippers of the race on the starting line. And may be the first non french skipper to take it. Mail interview.

1. Chris, did you follow the Transat The Transat #thetransat #ostar 650 2001 and what do you think about this edition (the winner : Yannick Bestaven ; the design of Aquarelle.com : Magnen-Nivelt ; the course : to Brazil) ?

I did follow the mini and would have liked to have been there. It was very good to see so many familiar faces and I was very happy to see Yannick, Arnaud, Olivier and all the competitors do so well. It is very hard from down here to tell how the designs of the new boats have changed. The new course to Brazil does not change much as far as the sailing goes as far as I can see.

2. You are building a new mini 650 Mini 650 #mini650  : Can you describe this new design by Brett Bakewell-White ? Wide, light, powerfull ? And which are her main differences from your previous mini ?

Yes it is wide light and powerful. The main difference between this boat and Navman is the building materials. Check out www.bakewell-white.com.

3. Why do you want to enter again in the mini after a third place in 1999 and which are your offshore projects after this new one ?

My dream since I was a young lad has been to campaign an Open 60 in the around the world races. When I got back to NZ in 2000 I tried to find a main sponsor but I have been unable to do so (even for the new mini). The response I got from the big corporate companies was ; Chris Sayer, who is he ? Mini Transat, what is that ? Third, well that is not very good is it ? So I had a choice, either to let the dream die or battle on. So after the 2003 mini it is anybodies guess what I will be up to. Aiming for the 2005 mini if we come 20th ?

3 Questions Net To : Leo Voornevelt : "it can bring the transat back to be the experimental class"