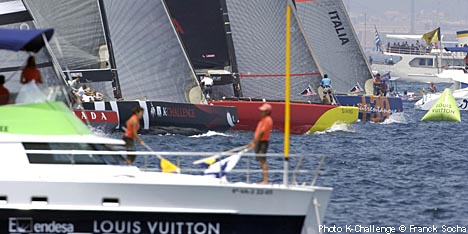 They appeared to have won the regatta on the water, but Victory Challenge had to wait until a Jury decision was issued several hours after racing concluded to learn that they had been disqualified from the fourth race. The next boat on the leaderboard, Luna Rossa Challenge, had sailed a strong, consistent regatta, and they become the winners of Act 5.

“I don’t have a preference for match racing or fleet racing,” Luna Rossa skipper Francesco de Angelis told the crowd at the prize-giving ceremony. “My only preference is for winning!”

It was a heartbreaking set back for Victory Challenge, who impressed all observers with their strong performance in both Valencia Louis Vuitton Acts, but particularly in Act 5.

The protest was a technical one, after the Measurer found an unusual amount of water in the bilge of SWE 63 during a routine inspection after the fourth race. This set in motion a chain of events that saw the Race Committee obliged to protest the Swedes for the infringement of ACC Class Rule 36.12. The Jury, after receiving a report from the Measurement Committee detailing the rule infringement in the protest hearing, was left with no recourse but to disqualify Victory Challenge from the race.

The results leave Luna Rossa Challenge and Alinghi on equal points at the top of the table, but the Italians win the tie-break by virtue of having the best result in an individual race (a win in race four). Victory Challenge tumbles from first to sixth with the disqualification.

Luna Rossa was presented with a Mariscal-designed trophy following the revised results in front of a large and appreciative crowd at the America’s Cup America's Cup #AmericasCup Park.

For the start of this, the fifth and final race of the Valencia Louis Vuitton Act 5, racing started on time and there was an even spread across the line with +39, China Team, Luna Rossa and Team Shosholoza at the pin and, as usual, United Internet Team Germany gybing around from the course side of the Race Committee boat.

Half way up the beat James Spithill and his Italian team on Luna Rossa had edged ahead on up the middle of the course with Victory Challenge holding second position to their left and Alinghi coming across from the right side. But towards the end of the first beat Desafío Español, with Karol Jablonski back on the helm today, hit the left hand side of the course hard, a move that paid handsomely come the first mark rounding.

Approaching the top mark the top three boats were side by side with Luna Rossa on the inside, the Spanish in the middle and Victory Challenge on the outside. Rounding the mark, the Spanish managed to hold their speed Speed #speedsailing and edged ahead to take the lead, as the Swedes on Victory Challenge rolled Luna Rossa to take second by the spreader mark. At this stage Alinghi and Emirates Team New Zealand were down the pack holding eighth and ninth places respectively.

Rather than the run being a procession as we have seen on previous days, several boats gybed early to take their chances on the right side of the course. The major beneficiary of this tactic was Mascalzone Latino-Capitalia Team. Coming into the leeward mark the Spanish team were still ahead with Luna Rossa and Victory Challenge charging hard and Mascalzone on their transom. BMW ORACLE Racing lost a few places when its spinnaker exploded during a gybe.

The second beat was an equally close-run affair with Victory Challenge slowly overhauling the Spanish team to momentarily take the lead. Luna Rossa seemed to lose out by hitting the left side while Mascalzone Latino once again did well on the right. The second weather mark rounding was less fraught than the first with Spain holding the lead over Victory Challenge and Mascalzone Latino, with Luna Rossa approaching from the port layline having dropped a place. At this stage the top four had pulled out a 50 second lead over +39, followed by Emirates Team New Zealand and Alinghi, with BMW ORACLE Racing well down the fleet in 10th place.

Once again the run saw a variation in tactics culminating in the closest finish we have seen to date in the fleet racing. Alinghi, the only boat sailing under spinnaker and staysail, seemed to put on a burst of speed Speed #speedsailing on the right side of the run overhauling both +39 and Emirates Team New Zealand. But the Italian team of Mascalzone Latino-Capitalia led by Vasco Vascotto also made a final dive for the line, overtaking Victory Challenge to take second place, just three seconds short of the Spanish team, the popular winner of this final race. Alinghi also approached the line at speed and was within one second of taking fourth place off Luna Rossa. Nobody knew it at the time, but this close finish is what allowed the Italians to win the event.

The technical protest and eventual Jury decision disqualifying Victory Challenge shouldn’t be allowed to overshadow an impressive and courageous day of sailing by the Swedes. After dealing with two protest issues on Saturday night and through Sunday morning, this small team, led by Magnus Holmberg, went out to the race course late and yet still sailed its heart out on the water beating the ‘big four’ in the race on Sunday. Victory Challenge will re-group and enjoy sailing on home waters off Malmö-Skåne in Louis Vuitton Acts 6 & 7 beginning on August 25th. 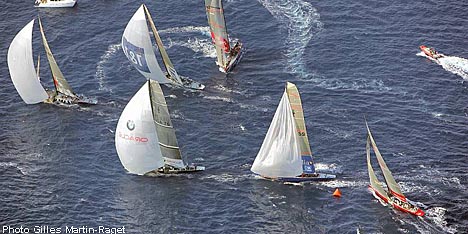