Pierre Rolland takes the lead in the west of Mc Kee

After a long wait, the full effects of the doldrums are gradually coming into play with a fair few of the controls changing hands. Though David Raison (440 - Rayon Liquide) remains the games master amongst the Series fleet, it is now Pierre Rolland (247 - Extrado) in the lead in the Proto fleet. 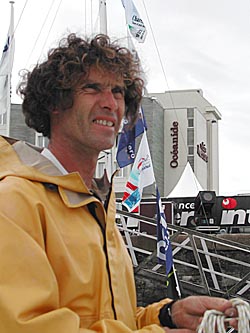 Rolland hung onto his westerly option (293 degrees longitude), even in the vast calms of the doldrums and is now reaping the benefits. In so doing the naval architect has overtaken Jonathan Mc Kee (247- Team Mc Lube) who has been in the lead since the start in Puerto Calero and is currently at 263 degrees longitude.

At the ranking on Tuesday morning, Rolland had a 25 mile lead on the American and 51 miles on Alex Pella (240 - Aquatec - Santiveri Texknit). The Spaniard has finally been rewarded for his obstinate westerly option and subsequent threading back towards the bulk of the pack, while remaining a little off centre.

The loser in the night’s proceedings is Armel Tripon (151 - Moulin Roty) at 255 degrees longitude. Second since Lanzarote and stuck to Mc Kee like glue, he has been hanging further out to the east than the rest of the leading pack. As a result he covered just 45 miles in 24 hours and has slipped back to 6th in the ranking, 53 miles astray from the new leader.

He is undoubtedly trying to escape the doldrums in more unrestrained wind in place of the closer wind that is likely to affect his rivals and, in so doing, compensate for his static keel in relation to the latest generation Protos. Evidently, the speeds recorded are more modest but Rolland owes his success to the 110 miles he‚s managed to swallow up in the past 24 hours, in contrast to Pella‚s 107, 94 from Bruno Garcia (354 - Saladino) now in 4th, 93 to Willy, the brother (353 - Ceylan Diamantes) in 5th, 86 to Samuel Manuard (431 - Tip Top Too - Le Grau du Roi - Port Camargue) in 7th and above all the lowly 63 miles to Jonathan Mc Kee.

Of course the doldrums vary in thickness depending on the longitude and currently resemble a potato that swells in size as it leaves the bay of Guinea, likely to push and pull those still left in its clutches. In this game of cat and mouse, it is the doldrums that decide who to release first. Whoever it is will be taking a big step in the right direction even if Salvador de Bahia is still a long way off.

The Series fleet is suffering the same effects and the same consequences. Though Raison is holding onto his lead, he is witness to the worrying comeback of David Sineau (428 - Pogo 2 Navy Lest). The latter is 280 degrees west and Raison 272 degrees. These 8° make all the difference and have seen Sineau close in from 36 to 19 miles in the past 24 hours. Though the others are gradually nibbling away at the leader, the greatest leap has been made by Patrick Bot (245 - Finis’Mer - Ecole Navale). He has gone from 11th into 5th place after shooting up from 62 to 36 miles from the head of the fleet.

However, nobody is managing to escape the entirety of the big calm. « Dadjo Dilo » in the centre of the leading group admitted : « We have three knots of wind ». This explains why Thomas Valentin (185 - Thomas Hawk) was making a frustrating 0.5 knots, while Gilles Guillerm (322- Blue Bossa) and Mc Kee were making around a knot.

Irishman Cian McCarthy was up into a glorious 8th position, while Brits Ian Munslow and James Bird were down into 14th and up into 47th respectively.