He has been an Olympic champion, double world champion, part of the last American challenge on « One World » during the America’s Cup America's Cup #AmericasCup . Some doubted his abilities as an ocean skipper but here he is at the head of the fleet in the second leg of the Transat The Transat #thetransat #ostar 6.50. 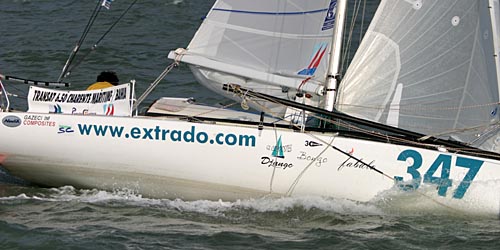 This Tuesday afternoon Jonathan Mc Kee (247 - Team Mc Lube) took control of the race with a five-mile lead on Armel Tripon (151 - Moulin Roty) and 30 miles on François Cuinet (136-Réglisse). Samuel Manuard (431- Tip Top Too ˆ Le Grau du Roi ˆ Port Camargue) has slipped back to 4th place, 36 miles from the American at the end of a calmer day, despite a good north north-easterly of between 15 and 19 knots.

Gaspard Franeau (109- Avocats sans Frontières) has made it known that he had automatic pilot problems that he hopes to sort out himself. Cécile Poujol (345- Informatique et Statistiques) has recovered from food poisoning but has now lost a spinnaker while Arsène Ledertheil (333- La Cigogne de l‚Océan) is focussing on the students from classes in Alsace that are following his progress.

The sailors have different goals. Some are managing to hang on to the leading pack with less powerful or older boats while others aren‚t doing quite so well as in the first leg. David Sineau (428- France Fermetures), Michel Mirabel (421- Gwalarn IV) or Jean-Pierre Balmès (330-Cecim) in the Series fleet, and Pia l‚Obry (316-Expatria.fr), Richard Mérigeaux (260- Bon Pied Bon oeil) or Donald Wright (227- Russe Noir) in the Protos are the most notable.

Currently they are all roaming between 18th and 36th place, with Tripon 78 miles from Sineau and 118 miles from Balmès. There are two possible explanations for their relatively lowly positions. Either they have suffered a few setbacks on the way which they are loathe to reveal or it is down to the weather conditions between the first stretch from La Rochelle to Lanzarote and those that they are experiencing at the moment being completely different. The crossing of the Bay of Biscay was close-hauled as far as Cape Finisterre. Then there was the descent down past Portugal with light winds and even calm at times. When the wind joined in it was downwind, a point of sail where the swinging keels of the protos are at their best. For this leg, the wind came in straightaway. There were built-up seas, a swell with cross seas forcing at least two gybes during the day and over all else... there was the fear of breakage. There were numerous incidents scattered across the fleet in the first few days and perhaps skippers like Swede, Pia l‚Obry, and Frenchman Richard Mérigeaux have eased off the pace to calmly await their turn, like Jonathan McKee (8th on Sunday evening, leader on Tuesday) and Samuel Manuard, 12th on Monday, now 4th.

Now, at the head of the fleet, the frontrunners have sprinted off for a marathon of 2900 miles and at least a 20-day crossing. It remains to be seen if they can maintain the pace as far as Brazil, or if man or machine (or both) is going to beg for mercy at a given time. The current sailing conditions mean that autopilot management is a deciding factor. In these heavy seas, they work more, tire quicker and use up more energy. Now, over three weeks they are vital. The road to Salvador is a long one and the leaders of the first leg will not necessarily be those elected in Brazil.

Bemuda 1-2 : Pogo and Open 60 between Newport and Bermuda