Winner of the Mini-Fastnet and favourite of the Transat 650

The designer-builder-skipper Samuel Manuard has just won the two-handed Mini-Fastnet. He is unbeatable this year out of tandem since he has also won the Odyssée d’Ulysses at the beginning of year. These two titles make of Samuel Manuard the SeaSailSurfer of June 2003. 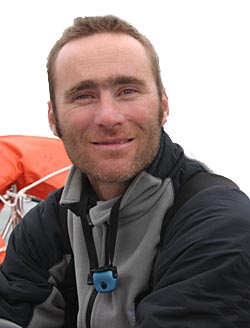 But who can beat Manuard on a mini ? In double, that seems impossible mission after its new victory in the Mini-Fastnet. It had however not come with its boat but with a sistership. That which Loic Le Bras had been made build to try to qualify himself for Transat 650 in September. Not being able to take share with the race, Loic left his mini to the one who drew to him to sail between Douarnenez Douarnenez #Douarnenez and the Fastnet rock. During this time, his yacht was awaiting him it Port Camargue where she will be prepared for the next transatlantic race.

Sam will be besides the hot favorite of the Transat The Transat #thetransat #ostar 650 Charente Maritime - Bahia 2003. The reasons are obvious. That which will take a lead in the course between La Rochelle and Brazil east to be located on the podiums of the beginning of season. For the moment, Sam has two titles in his prize list and a podium on four races. Even if these victories have been taken in double, Manuard can sail alone too. Because to succeed Yannick Bestaven, it will also be necessary to hold out during nearly one month of solo navigation. And Sam, him, he knows the way. Two years ago, it finished fourth.

Just like Bestaven and Magnen the preceding winners, Manuard will still form part of the recidivists of the race. A large asset vis-a-vis part of the competition which does not know the route. Just like Sebastien Magnen and Yannick Bestaven still, he built his boat and especially, like Magnen, it drew her (cf article 771 ). Sam will thus set out again on a course which he knows, with a boat which he controls and with the firm intention to do better than fourth... Who says better ?

Also, its qualification for Transatlantic race 650, it is now assured. At the head of the waiting list of the competitors registered out of prototypes division, he profits from a desistance on the list from non-European to obtain a ticket for La Rochelle, next 7 September. In any case, the member of office of the Mini Class was in favorable position to enter the list in time...