Bernard Stamm SeaSailSurfer of May 2003

Winner of the round the world race with stopovers

SeaSailSurfer of May 2003 is nobody other than our friend Bigouden-Switzerland Bernard Stamm. By winning at the beginning of the month the fifth leg of Around Alone, the sailing round the world race with stopovers, Bernard entered the legend of offshore racing. 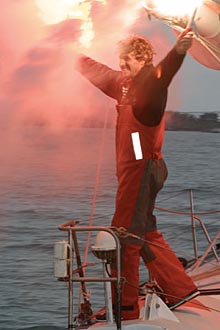 He succeeds in the prize list impressing of Around Alone, ex-BOC Challenge and future 5-Oceans (!) to Philippe Jeantot, Christophe Auguin, Alain Gautier and Giovanni Soldini. With his record Record #sailingrecord of the Atlantic and the record Record #sailingrecord of distance covered of 24 hours on a monohull, what is to wish moreover to the SeaSailSurfer of the year 2002 ? A victory in the Vendée Globe...

Cheers Bernard and so long !

Transatlantic record of crossing as a recluse for a monoshell 60 feet in 10 days 11 hours 55 minutes and 19 dryness.

Around Alone : 1st place of the stage n°1 Record speed enters England and South Africa for a monoshell 60 feet in 29 days 21 hours 59 minutes and 45 dryness.

Absolute record of the crossing of the Atlantic out of monohull and a crew in West in 8j 20h 55m and 35s on "Armor Lux" (3 team-members : Christophe Lebas [ FRA ] - Jean Baptiste Olliver [ FRA ] - François Sheeck [ FRA ]) (Approved Wssrc)

Holder of the Record speed in 24h out of monohull and a crew with 467,1 miles of 24 hours (Homologué Wssrc)

Abandonment following a damage of autopilots and helm.

3rd of Transméditerranée in double 1996 by winning two legs out of three.

3rd of the Championship of France Minis 1996