The outstanding achievements of sailors Ellen MacArthur (GBR) and Robert Scheidt (BRA) were recognised by the world of sailing with the announcement at the prestigious Awards Presentation held tonight, 13 November 2001, Lisbon, Portugal, that they are the respective female and male "ISAF Rolex World Sailors of the Year 2001".

The Awards Presentation, which was hosted by the 1996 Olympic Gold Medallist in the Finn Class and ISAF World Sailor of the Year 1999, Mateusz Kusznierewicz (POL), was attended by more than four hundred guests, including the President of the Portuguese Republic – Dr Jorge Sampaio, and President of the International Olympic Committee – Dr Jacques Rogge, alongside representatives and well-known sailing figures from more than sixty countries.

Speaking on the announcement of the winners of the ISAF Rolex World Sailor of the Year Awards 2001, ISAF President Paul Henderson commented : "Ellen and Robert demonstrate how diverse our sport is, with each representing opposite ends of the sailing spectrum. They have achieved at the highest level and are both great sailors."

Ellen and Robert were each presented with a Rolex Yachtmaster chronometer and an ISAF Rolex World Sailor Trophy ; which is a sphere of soladite depicting the world, crowned by five silver spinnakers representing the continents.

Ellen MacArthur was nominated for the ISAF Rolex World Sailor of the Year 2001 in recognition of her extraordinary successes in the 2000-2001 Vendée Globe single-handed circumnavigation. She proved that size doesn’t matter by trouncing all except the winner to become the fastest single-handed female circumnavigator (second fastest sailor ever), completing the Vendée on her Open 60 "Kingfisher" in 94 days, having sailed 25,780 nautical miles, breaking the previous record Record #sailingrecord by just over 30 days. After the Vendée, Ellen went on to be co-skipper on "Kingfisher" to win the EDS Atlantic Challenge (a five-leg race including transatlantic) and navigator on the winning 60 foot trimaran "Foncia-Kingfisher" for the Challenge Mondial Assistance (a 2700 mile race from Cherbourg, around the Azores, to Tarragona on the east coast of Spain). The Challenge Mondial Assistance was Ellen’s first race with Alan Gautier with whom she is now racing double-handed on "Foncia-Kingfisher" in the Transat Jacques Vabre Transat Jacques Vabre #TJV2015 , a race from Le Havre, France to Salvador de Bahia, Brazil, in which they are currently placed 2nd in the multihull fleet.

Ellen commented : "I am always surprised to be nominated for awards like these, but hope that any recognition of this kind is simply recognising that anyone can achieve their goals if they work at it. Equally a nomination of me for an award is a nomination for my team, sponsors and supporters over the years - whilst I may race often on my own, it is a great team effort to get to the starting line ready to compete." 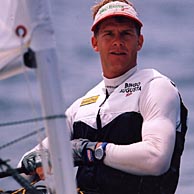 The renowned Brazilian Laser sailor, Robert Scheidt (photo) was acclaimed with the ISAF Rolex World Sailor title in the male category. He has dominated the Laser Class over the years to such an extent that any sailor would be hard pushed to match across any other class, winning his fifth Laser World Championship title in 2001 (1995, 1996, 1997, 2000, 2001), alongside bullets at other major championships during the year, including the Central and South American Championships. These successes sit alongside his collection of Olympic Medals, a Gold in 1996 and Silver in 2000. Robert first struck gold in 1985 winning the South America Optimist title aged twelve, before moving on to the Laser Class to take his first title aged eighteen years at the 1991 ISAF Youth Sailing World Championship. Robert aims to continue his domination to achieve a further Gold Medal at the 2004 Olympic Regatta in Athens, prior to aspirations towards the America’s Cup America's Cup #AmericasCup and Volvo Ocean Race Volvo Ocean Race #VolvoOceanRace .

The nominees in the respective female and male categories were :

In reaching the shortlisted sailors, nominations were openly invited, with sailing clubs, classes, individual sailors and ISAF Member National Authorities proposing sailors. To determine the winners of the ISAF Rolex World Sailor of the Year Awards 2001, it was the 112 Member National Authorities of ISAF - the national sailing federations of the world - who voted for the winners.