John Kostecki : "We will be keeping our eye on Assa Abloy more than the other boats" 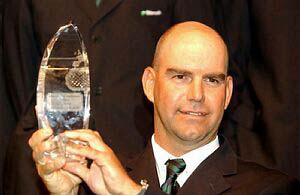 Q : Edward Adams from the USA. A new team member late in the day ?

A : We have brought Ed Adams onboard to help strengthen our afterguard. He brings a lot of different talents with him. He was coach for Mark Reynolds and his crew for the 2002 Olympic Games where they won a gold medal. He has won a Star world championship himself as a helmsman. He has navigated several boats to offshore victories. He sailed with us on illbruck in the 1999 Fastnet Race which we won. He has a lot of different talents. We felt we were a little weak at times, close to shore. We are hoping that he is just going to bring some different energy and fill in our weaknesses.

It’s not a very big change as we always have this rotating spot with Noel Drennan, Ian Moore and now Ed. Ed had been involved with us early on. He set up our two boat testing programme and did a lot of testing with us. Unfortunately family circumstances had prevented him from travelling round the globe with us ; otherwise he would have been with us the whole way round the world in some capacity. He also brings weather and meteorology strengths. He is very well educated there and does weather predicting for one-design races. A multi talented guy and I am really looking forward to racing with him again.

A : Ian is very much a team player. We spend a lot of time studying the weather and the course before each leg and Ian is a huge part of that whether he sails or not. Very much a team player, Ian is willing to do whatever is best for the team. He’s taken it well and we will see how this works on this leg and make a decision on what we are going to do for the last leg.

Q : Difficult tactically, this leg ? Will you be looking for Assa Abloy ?

A : Tactically it is a difficult leg, a lot of peninsulas, and a lot of current. The wind is going to be tricky. First you have to deal with those factors and then you have to deal with the other boats. Our goal is to really go out and do what we have been doing and hopefully we can have another podium finish. We will be keeping our eye on Assa Abloy more than the other boats.

Q : What is so tricky about this leg ?

A : A lot of current up at Brest Brest #brest , through the English Channel, Dover Straits, those are going to be some really tricky areas. As you get into the North Sea and up into the Norway, Denmark, Sweden area, you normally have lighter air, very unpredictable. There could be some fickle winds like we have had in the Chesapeake, so it could be real dicey sailing up in that area of the world.

Q : Have you sailed much in that area of the world ?

A : I have done a fair amount, probably three or four regattas. I feel comfortable with it, and I have always been successful in that part of the world, so personally I feel confident.

Q : Have you had to keep the guys feet on the ground after that great win on the last leg ?

A : A great win and everybody did a great job on our whole team. We have been pushing hard, our competitors will be pushing hard. We haven’t let up at all. Maybe we’ve even pushed a bit harder than normal. We want to win this thing and we want to put in 120 per cent effort, and we would hate to lose this knowing that we only put in a 90 per cent effort.

Q : Have you got slots on your sail inventory that you can fill ?

A : We have four sail slots. It’s looking like we are going fill three of the four for this leg. We are keeping an eye on everybody else on what their sail slots are like and what kind of boat work and sailing they are doing. We keep our eyes open just to know a little bit about what everbody else is doing and how they are preparing. I think it is good. We are happy with what we have and where we are headed. We’re confident for this leg.

Q : It seems that at this stage at the race, the crews are beginning to relax with each in the stopover ?

A : It is normal for this race for the teams to get a lot more relaxed as the race goes on. It’s too bad it can’t start off that way. La Rochelle has been a nice stopover. Our whole, entire, team has remained here the whole time and I think we have all enjoyed it, great cuisine, parties etc. We’ve had a good time so far.

A : The boat is in good shape, fortunately it arrived here in good shape and so we have had little work to do. We really just going through it with a fine tooth comb to make sure we don’t have any breakdowns on this leg.

VOLVO OCEAN RACE : Knut Frostad : "I don’t know why we were slow"