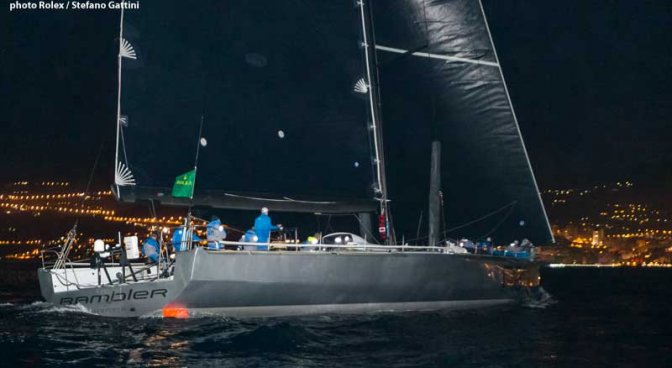 Starting from the Golfe de Saint-Tropez at 12:35 yesterday, the maxi fleet competing in this, the fourth and penultimate event in the IMA’s 2018-19 Mediterranean Maxi Offshore Challenge, first rounded a turning mark to the west off Cavalaire-sur-Mer. They then continued to the Giraglia Rock off northeast Corsica before turning sharply to the WNW bound for the finish, this year, in Monaco.

From the outset, George David’s Rambler 88 was favourite for line honours in Rolex Giraglia. The question was – would the American maxi, sailing her first ever Rolex Giraglia, break the race record Record #sailingrecord of 14 hours, 56 minutes and 18 seconds set by Igor Simčič’s 100ft maxi Esimit Europa 2 in 2012 ? This would require Rambler 88 finishing before 03:31:18 today.

Heading to the Cavalaire turning mark, George David said that they had been pleased with their upwind speed, the result of modifications made to Rambler 88 over the winter such as fitting a new lighter rig, enabling a reduction in bulb weight and an overall reduction of 1.5 tonnes. “Normally in a breeze Magic Carpet 3 is a click faster, but now it is the other way around,” observes David.

Once out into the open sea and blasting towards the Giraglia Rock, Rambler 88 breaking the record Record #sailingrecord seemed very possible. “This boat is unbeatable when it is 70-110° TWA and 25 knots : We just exploded downwind – and left a lot of people behind,” described David.

It was still looking good after rounding the Giraglia Rock at dusk, when they hardened up for the port tack fetch towards the finish.

But sadly it was not to be. David explained : “We thought the record was close until about an 1 hour 20 minutes out when we parked for almost an hour - that was the margin right there. But that is what happens when you come into Monaco with its big hills and also if you finish races at 3-5am when ‘bad things’ normally happen !” Rambler 88 ghosted across the finish line at 04:35:35, just over an hour outside the record.

Tactician Brad Butterworth added : “We wanted to come in from the south, which is what we did, but we got headed and ended up tacking on to starboard. Then we sailed to within three miles of here and just stopped...”

While it was a good result, Owen-Jones said that the conditions generally through the race had favoured their opponent. “It was a really fast downwind in which we know that the pure racing canting keel boats will always been ahead. Our hope was that on the way back there would be a lot of uncertainty, the wind would have dropped /it’d all be very tactical. But it was a slog back and not even dead upwind, but a fetch. So we dreamed for a couple of minutes but it wasn’t to be…”

Owen-Jones added he was pleased to see the Giraglia Rock at dusk rather than the subsequent dawn. Their time was a personal best by a considerable way.

Magic Carpet 3’s race was hampered by taking on water in their bow compartment where the anchor comes in, while their 50 tonne boat blasted downwind at 25 knots.

Next arrivals into Monaco after dawn were Alex Schaerer’s Maxi 72 Caol Ila R and Sir Peter Ogden’s Jethou, Dario Ferrari’s Cannonball having not started yesterday. While Jethou had led out of the Golfe de Saint-Tropez it was Caol Ila R that finished 24 minutes ahead of her longer, higher rated rival.

Initially a computer failure had forced Jethou to give the coast a wider berth, allowing Caol Ila R through. Then after the turning mark, Jethou had hoisted their A4 and, as tactician Paul Campbell-James described it, “Jethou was launched and gained loads.” Sadly the wild sleighride lasted just an hour before the A4 blew up and they had to hoist their Code 0, offering them only 87% VMG on polars.

Common to the rides on both 70 footers was how profoundly wet it was, with constant green water being blasted down the deck in the downwind conditions to the Giraglia Rock. “We spent the whole time with water coming over the bow,” continued Campbell-James. “We had sealed up the openings but wherever that a rope goes through the deck, water was just pouring in. Down below it was like a swimming pool with the bilge pumps running and people bailing constantly.” However personally he had relished the three hours he spent high speed downwind helming, as they set out for Giraglia.

Again, unlike Rambler 88, Jethou saw the wind get light but only for around five minutes and they didn’t stop on the approach to Monaco.

This was also the case for Caol Ila R. They had employed a different tactic for the upwind leg back to Monaco, as navigator Will Oxley explained : “We chose to sail a slightly lower, faster course because we expected that there would be some sort of northeasterly transition close to the shore. That we did fine, so we didn’t see too much of what happened to Rambler.” 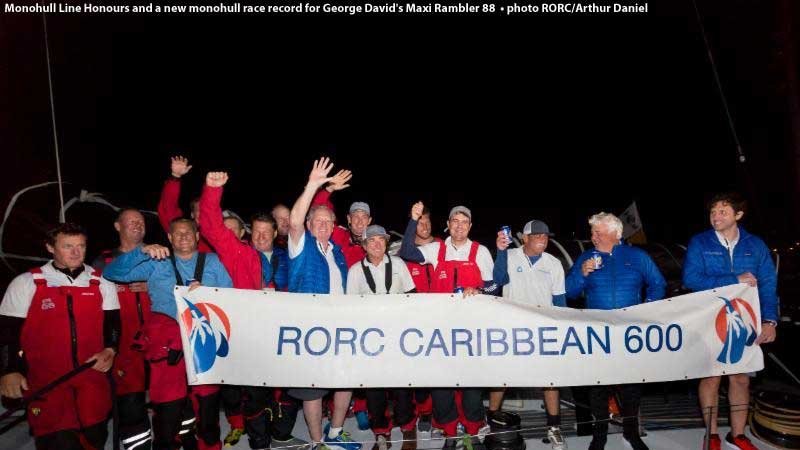