However, despite winning on Welsh waters, McMillan is preparing for the battle for the 2013 Series championship to go all the way to the end of the line :

“We’re not any more confident after this win, we’ve got a lot of work on our hands. It’s going to be a huge fight all the way to Brazil.”

Leigh McMillan and his crew of Musab Al Hadi, Hashim Al Rashdi, Pete Greenhalgh and Ed Smyth came flawlessly out of the blocks today, enabling them to get out of the clutches of their competitors and sail their own race in punishingly light winds. The team kept it consistent and delivered 11 race wins over the course of the event. Dockside, a jubilant McMillan explained :

“We were very quick to get onto the changing shifts and that was probably our biggest game changer. We were really positive about what we wanted to do and we kept on executing it and that was a real asset, as well as the guys sailing so well on the boat and giving me information. Once we got off to a good start at the beginning of the day we just kept the ball rolling and never looked back. We just wanted to sail well and make good decisions the whole way through the day and that is what happened.”

While the crowds basked in the sunshine of a beautiful bank holiday Monday, out on the race track shifting winds that got lighter as the day went on saw tactics become trickier. In the challenging conditions – perhaps the most challenging the fleet have faced all year – mistakes were punished hard, something Morgan Larson and the Swiss team found out. Failure to get off the start line in the second race and a penalty in the fifth race for hitting a mark ultimately proved costly, allowing McMillan to extend his lead. Back on the dock, Morgan Larson, who took the tiller from Ernesto Bertarelli in Cardiff, was already turning his attentions to the forthcoming Acts :

“Between us and The Wave, Muscat one team had to step ahead on the overall Series leaderboard and that was them. But we’ve got two events left to go and we’re going to keep our chins up and we’re looking forward to having Ernesto back.”

According to the SAP analytics, during the final deciding double points race, the podium positions were changing with every manoeuvre and SAP Extreme Sailing Team did well to hold off the onslaught from the Austrian Red Bull Sailing Team, claiming their third podium position in 2013 :

“It was a very close race and I think that everything that could have happened did happen with the changing leads the whole time, it was so shifty that you never knew if you were ahead or behind,” a clearly ecstatic Rasmus Køstner revealed. “To finish third is fantastic for us, that is what we were aiming for going into this event. It was our goal to see if we could try to make third position against some really good teams, so we are really, really happy with that.”

A new unit sailing together in Cardiff, ChinaSpirit impressed on their Extreme 40 debut, showing they can mix it up at the front end of the fleet and finishing sixth overall, giving their skipper Phil Robertson a confidence boost ahead of the next Act in Nice :

“Cardiff has been great. We’ve performed probably above expectations and we’re thrilled to be here and have been able to keep in the mix with the stronger teams and to have gained a couple of podium finishes. Looking forward to Nice, there are a few little modifications we can make and there’s a lot we can improve on as well. There is definitely an art to starting with a reach and light airs, we’ll be working on that between events and coming back stronger.”

The local entry of Team Wales Land Rover, skippered by young talent Dave Evans, had the support of the 120,000 strong crowd, according to the Cardiff Council, that crammed into the best vantage points around Cardiff Bay over the four days, much to the delight of Evans :

“It means an enormous amount to us ! It’s a competition, and it gives us the opportunity to do well, but it also gives Cardiff the chance to see the boats and to see some of the local boys on them !” Continuing to talk about the tough transition to the Series, “It’s just like racing a new car and going straight out onto the race track. You need to know how quickly you can turn into the corners and when you can start to accelerate. These guys are very good at what they do, and I think we gave them a run for their money in a couple of races and that was good to see !”

Next stop for the Extreme 40 fleet is Nice, on the French Riviera for the final European stop of 2013 and Host Venue for the penultimate Act of the year, 3-6th October. 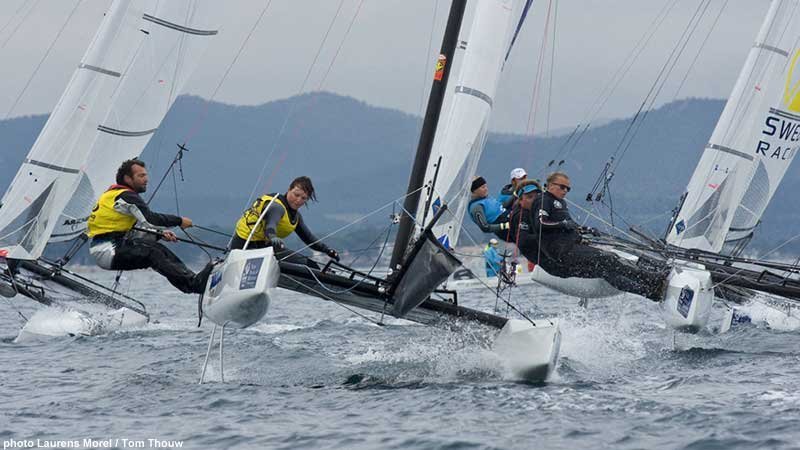 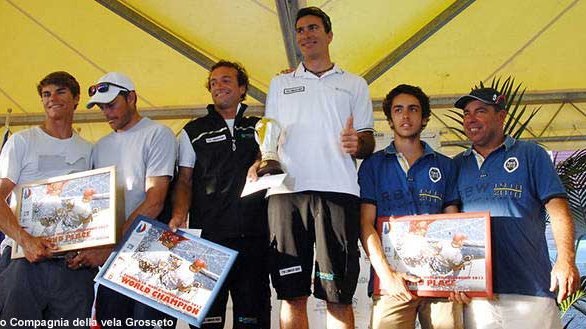 Round the Island Race : Ben Ainslie’s AC45 smashed the Isle of Wight record