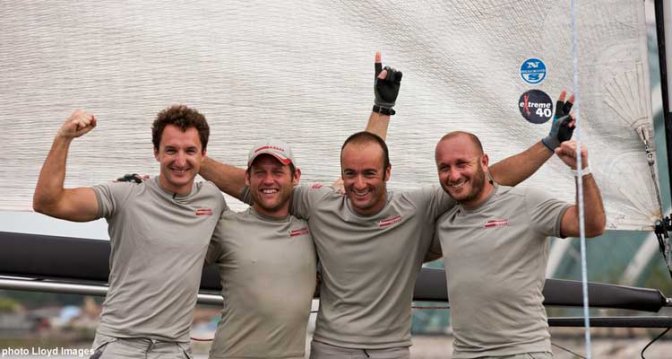 The Italian team Luna Rossa has won the final Act of 2011 in emphatic style and crowned the Overall Champions of the Extreme Sailing Series Extreme Sailing Series #extremesailing ™ 2011. Max Sirena, Paul Campbell-James, Alister Richardson and Manuel Modena, who have raced together on the Extreme 40 all season, hardly put a foot wrong over the 35 races here in Singapore.

They went into the final day with a previously unheard of 56-point lead over their arch rivals for the 2011 title, the French team of Groupe Edmond de Rothschild. There was little Pierre Pennec’s team could do as Luna Rossa put in another strong performance and after 10 races today, Luna Rossa topped the Act 9 leaderboard with a 45-point margin over 2nd placed The Wave, Muscat. “I’m really happy ! Now, finally !” said Sirena. “We close the season well and it wasn’t expected because we didn’t sail well in the last event. I don’t know what happened here but we sailed pretty well and started off the line always in the right position. Tactically and from a crew point of view we were sailing always at 100 per cent which is really good and I’m really proud of the guys. It’s great for our long-term future so we’re really, really happy.”

Despite 6 different Act winners during the year, coming into the final Act, only the French and Italian teams could win the overall title. Groupe Edmond de Rothschild took victory at the first Act in Muscat, Oman whilst Max Sirena’s team shone at Act 2 in Qingdao, China. And whilst Pennec’s men had a ‘home’ victory in Act 7 in Nice, France it was Luna Rossa who had a 1-point advantage over the French coming into the final round. After 11 months, 9 venues and 301 races, Luna Rossa finally got to lift the Extreme Sailing Series Extreme Sailing Series #extremesailing trophy. “We’re ecstatic right now,” said British helmsman Paul Campbell-James who has become the first helmsman to win the Extreme Sailing Series Extreme Sailing Series #extremesailing twice. “The goal for the week was to beat Gitana and we had a 56 point lead this morning and at lunchtime we had 59 point lead. I was doing the maths in my head and I knew that if we finished every race in the afternoon we would still beat them and we just had to stay out of trouble.”

In the end, it was the second place on the podium that turned out to be the most closely contested, coming down to the final double points race. Going into the final race Leigh McMillan and his crew on The Wave, Muscat were only 1 point ahead of Roman Hagara’s Red Bull Sailing Team – the Austrian team putting in a strong performance leading Act 9 for the first three days. The two teams went into match racing mode, rounding the first mark in third and fourth. Locked in their own battle they effectively raced each other down the fleet allowing the other teams to get through and finish ahead. This included Dean Barker’s Emirates Team New Zealand who finished the race in 2nd place as McMillan and Hagara ran out of time to finish within the time limit, scoring zero points. The Wave, Muscat and Emirates Team New Zealand were tied on equal points, the tie broken by The Wave, Muscat’s scoring more first places. “It was a pretty dramatic finish to the event for us after a couple of bad events,” said skipper Leigh McMillan. “So it’s great to be back on the podium and finish the season that way.”

But that result for Dean Barker’s crew in the final race also secured the Kiwi team third place on the overall 2011 podium ahead of The Wave, Muscat. “It’s been a very tough event with Luna Rossa showing the way on how to sail in these conditions and it’s been a very tight battle for the remaining set of podium positions,” said Barker. “We had a good start to the year, leading the circuit after four events and then we had mixed fortunes during the middle of the year. We knew coming here we could only get third which we’ve done.” Unfortunately for Roman Hagara’s team their hopes of finishing on the podium here in Singapore were over.

The fifth season of the Extreme Sailing Series™ comes to a close in Singapore after 301 races staged across the nine global venues spanning three continents that started in Muscat, Oman in February. This game-changing professional sailing circuit has attracted 287,000 on site spectators with its unique blend of ‘stadium’ short-course racing, including all the various disciplines and courses used already from fleet racing to match racing and straight line duels, whilst maintaining its high-level of competition which was borne out by producing 6 different winners from the nine events, all of which, bar one, were only decided in the final race on the final day.

Eleven top international teams competed in the circuit with many of the world’s best sailors on board, plus wildcard entries from Aberdeen Asset Management (Cowes) and Team TILT (Almeria/Singapore). 2011 saw a big step up of the public entertainment, with an extended mix of attractions on the public days that including the Olympic 49er class racing, Moth demo sailing, the NeilPryde Windsurfing Series and kids Oppie racing, all combined with on shore family-orientated entertainment from kids activities, dance and music took place within the Extreme Race Village. Alongside this event formula, stood the premium VIP facilities that is a vital part of the Extreme Sailing Series offering, that includes the unique guest sailing experience onboard the Extreme 40s. The 2011 series, despite light airs for final few Acts of the year, also goes down in history in delivering the most capsizes and crashes within a season with every Act being decided in the final moments of the final day. 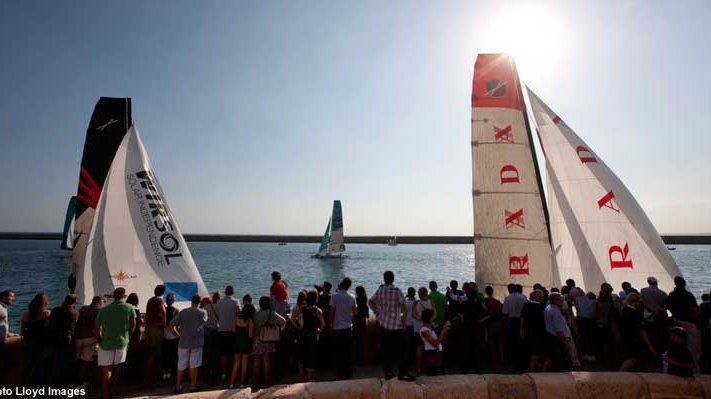 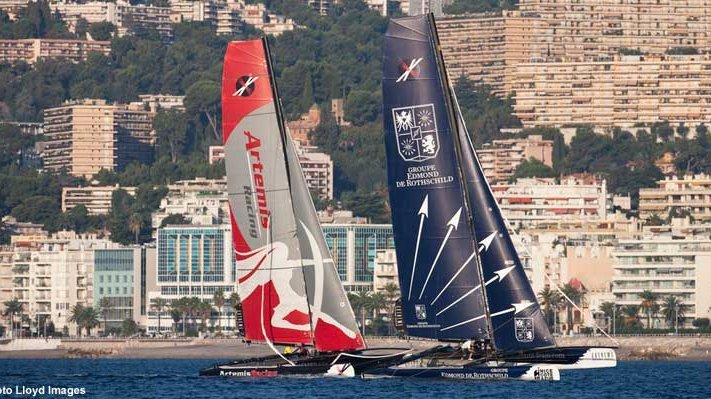 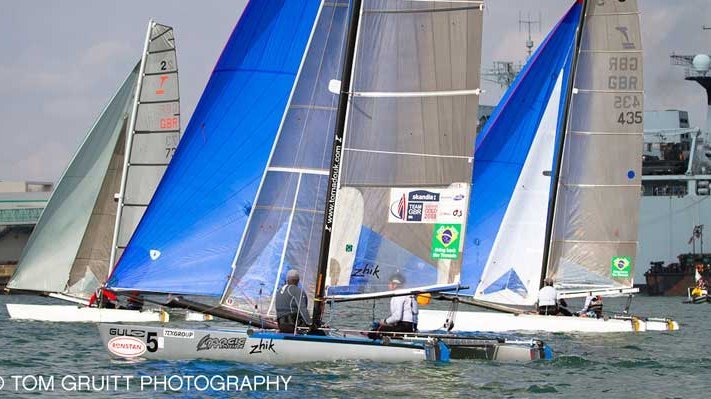 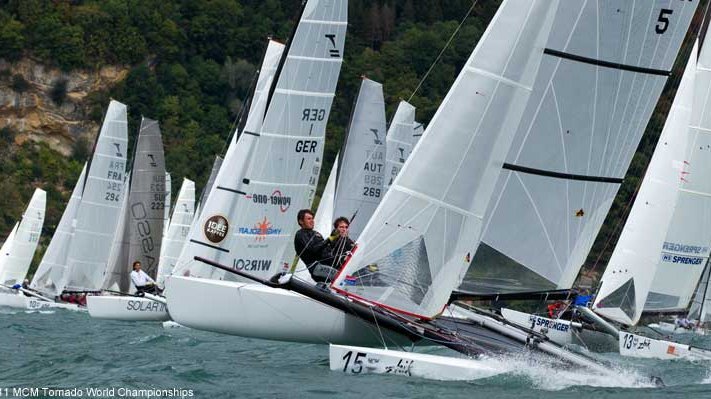