Desjoyeaux first to round Cape Horn 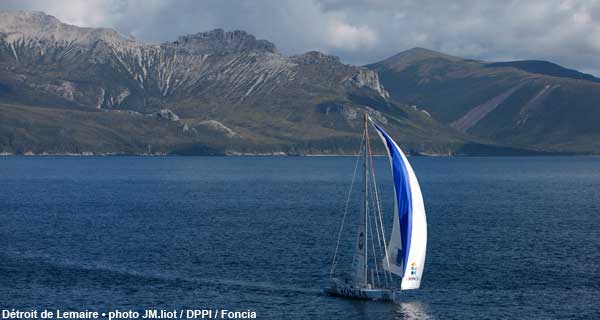 Leading the Vendée Globe, Michel Desjoyeaux on his 60 foot monohull FONCIA rounded Cape Horn (Chile) at 0310 UT this Monday 5th January. As such Michel has taken 56 days 15 hours and 08 minutes to reach Cape Horn and round the last of the great capes to be left to port after that of Good Hope (South Africa) and Leeuwin (Australia). 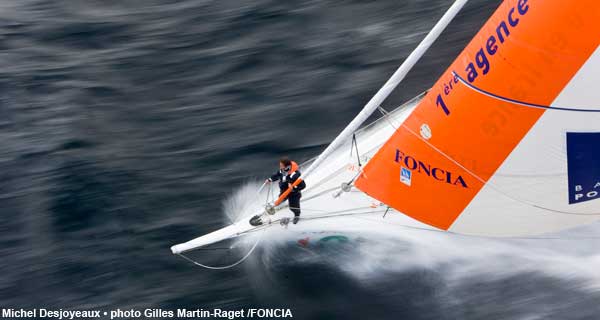 As a result the skipper of FONCIA has taken two hours less than Jean Le Cam in 2004 (56 days 17 hours and 13 minutes), who was the first to round Cape Horn during the Vendée Globe 2004/05. A staggering performance by the Michel Desjoyeaux/FONCIA duo when you note that the course across the Southern Ocean has been extended by 1,200 miles, given the N’ly position of the seven ice gates which have punctuated this navigation across the Indian and Pacific Oceans.

Though FONCIA has taken 16 days 05 hours and 40 minutes to traverse the Pacific Ocean, that is just quarter of an hour longer than Mike Golding in 2004/05, Michel Desjoyeaux may well set a new record Record #sailingrecord for the Indian Ocean passage. For now the record Record #sailingrecord is awaiting approval from the WSSRC (World Sailing Speed Record Council) but if it is recognised then the new reference time will be 13 days 6 hours and 30 minutes. Moving quickly onto the next ocean, Michel Desjoyeaux is today celebrating his return to the Atlantic with a new race on the horizon : 7,000 miles to go via the Saint Helena High, the Doldrums, the Azores High and the dreaded Bay of Biscay. There’s a month’s sailing on the clock according to Michel : “28 days after the Horn would be my rough estimate”.

Contacted at 0930 UT this morning for a special link-up, Michel looked back at the past month’s sailing in the Southern Ocean, the deliverance of the Horn, FONCIA’s condition after two months at sea, his physical and mental state, his rivals and the climb up the Atlantic. Extracts…

Passage around the Horn… “It was a bit full-on. The goal was to get to see the Horn but there was 35/40 knots of breeze with 45 knot squalls and, above all, little visibility. It was night time… Conditions were lively but it was pleasant... It’s rather like a deliverance as it signifies leaving the Southern Ocean and the permanent oppression of the wind ! It’s not so much the sea which is difficult… I think I have even less wind than I did 8 years ago. It’s not the strength of the wind or the height of the waves which is tiresome ; it’s the constant presence of the wind… The was a lack of variation in the pace… Here, even if you’re not making headway, you can relax a little. This morning I did some jobs on deck for a couple of hours, which was nice. I even passed some albatross sitting on the water, which is something I’ve never seen before. Even they come here to relax…”

Assessment of the Southern Ocean… “I’m in fine fettle. I’m happy to get out of my foulies and boots. My hands have been through it too… As regards food I have all I need ; enough to have a stowaway onboard and get him home ! Other than that I am happy to be here. My mind’s in good order and I’m relieved to have rounded this barrier. I’m also happy to be gradually getting closer to the finish line, home, landlubbers and civilisation.”

Recipe... “80% of the result is achieved through teamwork, from the moment the boat is built. There are things which can be improved on, but the real substance isn’t bad… In fact I shape 20% of the final result and in that 20%, you have to know how to be sparing with your gear and know what stresses it can withstand. I admit that in a few hellish surfs and memorable moments where she ploughed into waves, you just hold on in the hope that she stays upright. When I went to empty the water up forward this morning, I saw a little crack, but it was nothing drastic or serious. The boat has suffered all the same though… It just goes to show that I haven’t escaped without incident either”.

Positive attitude… “It’s not because I’m leading the Vendée Globe that I can ease off the pace. From first thing this morning I made the most of the conditions to do a few jobs in the garden and have a look at a whole bunch of things I haven’t been able to look at for the past month. You also have to shift the weight forward again, hoist more sail area, tidy up down below… My lead over Bilou (Roland Jourdain) will be reduced as there’s a tricky passage ahead but it’s necessary to get through it… I’m really enjoying the situation !”

Atlantic difficulties… “Between here and Cabo Frio along the Brazilian coast, we’re going to be calling each other’s bluff for the next 8/9 days… It’s an area where, on a strategic level, it’s going to be more risky and more treacherous because it’s fairly uncertain and there are lots of weather phenomena kicking about in every direction. In the long term it’s hard to build up a clear strategy. This isn’t the case in the Southern Ocean or in the rest of the Atlantic. There’s some mastic awaiting us here. Once we hit the Saint Helena High it’s a fairly classic system again with some strategic routes which are familiar to this zone. It’s reminiscent of our own backyards… However, what awaits us in the near future is not our backyard ; it’s a shambles. It’s going to require a lot of decision making and a lot of manœuvres… It’s certainly not over yet ; we’re going to have to wait until the finish line has been crossed to find out the ranking.”

Ahead… “We’re working with the same weather data, the same software and with virtually the same boats beneath our feet… There aren’t 36,000 solutions to get from one point to another. It all comes down to subtleties, which is something everyone appreciates. The important thing is to stay ahead of the game in order to win, and that’s where I am… We’re going to try to stay here. As such I’m not going to swap my weapon for another for the time being !”

Competition… “You know your adversaries but you can always be caught unawares… You have to stay on the alert. Bilou could always play a prank… I know him well. We’ve sailed together and we’ve always had a lot of fun doing so. Over recent days he’s shown that he’s capable of belting along on his Veolia without any trouble at all and without showing any signs of difficulty. Indeed I’m not in the least surprised to find him here, just beside me, like Jean (Le Cam). He has an interesting boat. Added to that there are our two rogues (Vincent Riou and Armel Le Cléac’h), who’ve got a little left behind and missed the train at the point where you had to keep the pedal to the metal. In view of how far we’ve got left though there isn’t that much separation.”

A word to the wise… “When you tackle problems the right way and you put your heart into them, a lot of great things can happen.”

Vendée Globe : Jonny Malbon : "I have to stop… I have no choice" 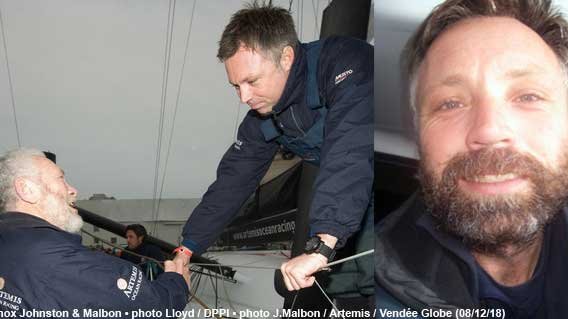 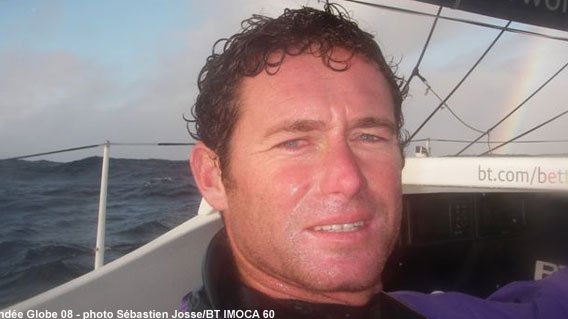 Vendée Globe : Sam Davies : "I gave in to the temptation" 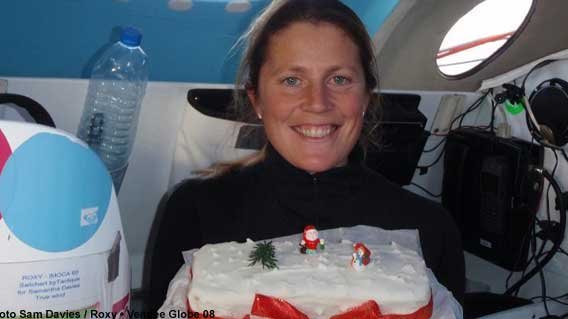 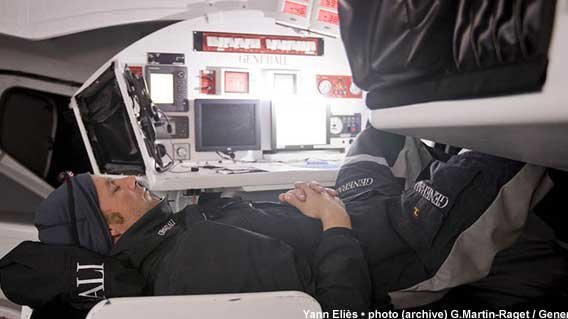