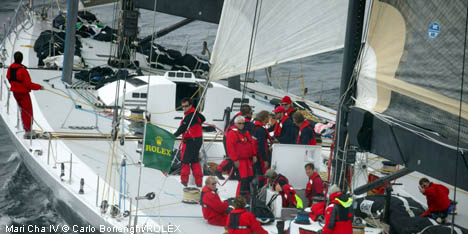 Having established a new transatlantic race record Record #sailingrecord between New York and the Lizard, UK, yesterday morning, the afternoon saw Robert Miller’s Mari-Cha IV making an unexpected 20 knots up the English Channel towards the Needles and the finish line of the Rolex Transatlantic Challenge race.

The wind, forecast to drop off, held, and shortly before dusk, in a seascape so misty and overcast that it merged grey sky with grey sea, the high-tech schooner charged past the Needles Fairway buoy to the west of the Isle of Wight to take line honours, as well, in the Rolex Transatlantic Challenge. Mari-Cha IV crossed the finish line at 19:18:37 UTC, setting a course time between Ambrose Light (in the U.S.) and the Needles of 10 days, 1 hour, 8 minutes and 37 seconds. This compares with Atlantic’s time of 13 days, 10 hours and 15 minutes in the 1905 race for the Kaiser’s Cup.

Up the Channel, in hot pursuit of Mari-Cha IV, was Maximus, the new sloop of New Zealanders Charles Brown and Bill Buckley, who had passed the four-mile long gate off the Lizard at 19:18:37 UTC yesterday (1 June), making it to the Needles finish line at 00:35:08 UTC this morning (2 June), 5 hours 16 minutes and 31 seconds behind Mari-Cha IV. While this was disappointing for the crew, the consolation prize was a handicap win in the Grand-Prix division.

In fact, Maximus’s crew say that they weren’t racing for handicap honours. "We wanted to beat Mari-Cha IV on the water," maintains Mike Quilter, Maximus’s ex-America’s Cup America's Cup #AmericasCup and Whitbread round-the-world race navigator. "I suppose that’s human nature. You like to think you try hard, but in an arm wrestle, she (Mari-Cha IV) has too much muscle."

On paper, the race seemed highly unfair between the 140-foot (43m) schooner Mari-Cha IV and the 100-foot (30.5m) sloop-rigged Maximus, but in the end, despite both boats suffering broken headboards or headboard cars at the top of their mainsails, rarely were they more than 40 miles apart. Quilter attributed this to the conditions. "I think the conditions in the race suited us more than it suited her. It was light to begin with; then it was tricky upwind. So we were able to hang onto her." It was finally in the Channel that Mari-Cha IV was able to fully stretch her longer legs and leap ahead.

Even Maximus’ designer Greg Elliott agrees: "Given another sort of race in different conditions, Mari-Cha may have stomped all over us."

Mike Quilter was on board Mari-Cha IV when she set the passage record Record #sailingrecord for the crossing of the North Atlantic two years ago and is one of the few people qualified to make a fair comparison between the two giants of the yacht racing world. "Mari-Cha IV feels like an aircraft carrier, and Maximus is like a big Open 60 (a lightweight performance racing yacht)," he says. "Maximus did pretty well. We made it across and put on a good show, and the boat is obviously really fast. To me it surfs a lot quicker. For the transatlantic record Record #sailingrecord on Mari Cha IV, she kept up a higher average speed Speed #speedsailing , but on this boat we had fresh reaching conditions for 12 hours after the Gulf Stream, and we were regularly hitting 30 knots on the GPS every five or ten minutes. Whereas, Mari-Cha IV keeps up a high average speed Speed #speedsailing , but she doesn’t have bursts like this little boat."

The next boat due in to Cowes is the 151-foot (46.3m) Windrose, the first in Performance Cruising Cruising #Cruising class 1. She passed through the Lizard gate at 1135 UTC and is expected to cross the finish line Friday mid-morning. However, at present, it is the two Dubois 170-footers Drumbeat and Tiara that are leading on handicap. In the smaller Performance Cruising Cruising #Cruising class 2, it is still Bugs Baer and William Hubbard III’s 1970s-vintage maxi Tempest that is leading on handicap.

On the 131-foot (39.9m) Sariyah, racing in Performance Cruising class 2, the crew report that charterers Cortwright Wetherill Jr., Jeff Gram and Sam Shipley are relieved to be passing the half-way stage of the race but enjoying the excitement of constant heavy-air reaching.

In the Classic division, A. Robert Towbin’s Sumurun is still leading on the water with 1,575 miles to go at noon today. On board Carlo Falcone’s Mariella, also in the Classics, Sophie Luther reported last night they were experiencing the calm before the storm. "It is pretty unbelievable that a system 600 miles across, with winds of 50 knots in it, is brewing." The change, even if not its extreme nature, will be welcome. Mariella spent 12 hours on Tuesday becalmed.

Luther continued: "The ballot on board closed today for the estimated time of arrival at the Lizard waypoint and to the Needles itself, and the results were published in Carlo’s big black book. Merelita was the most hopeful, getting us in on the 9th June, which she says we will have to do not only so she gets free drinks when we get to Cowes but because we won’t have any more food after this point. Robin was the most pessimistic/realistic with late night 12th June."

From on board the schooner Atlantic on the equivalent day of the Kaiser’s Cup in 1905, Frederick Hoyt wrote:

"We had a fine night and with a strong breeze and moderate sea we averaged over 14 knots an hour. On coming on deck this morning a bright sun and long southwesterly swell and a strong breeze made a charming day. They put both staysails on her but with the wind increasing, they were up only for an hour, but we are going along in great shape and at noon today were only 213 miles from the Lizard, the finish of our race."