The next edition to be held in Ireland

At a Press Conference held at the Royal Ocean Racing Club in London, on 9 January 2002, the Commodore Peter Rutter was delighted to announce an exciting new format for the 2003 Admiral’s Cup.

A RORC Steering Group had been tasked with creating a new event aimed at reviving the Admiral’s Cup in 2003. The Steering Group considered that the Admiral’s Cup should include a recognisable offshore race as well as inshore racing. The event should be primarily, but not exclusively professional, transportable and no longer than two weeks. Teams to consist of two boats. Challenges are to revert to the Cup’s initial aim which was an international competition between Clubs representing Nations.

Peter Rutter announced that taking all these factors into account it had been agreed to base the 2003 Admiral’s Cup in Dun Laoghaire, Dublin from Saturday 12 - Saturday 26 July 2003.

He commented : “In finalising details of the new Admiral’s Cup format for 2003, the RORC entered a comprehensive consultation process and whilst not everyone supported each individual detail of the package, a clear consensus did emerge. What has also been discovered was that there remained a large body of experienced international competitors who were vociferous in backing our efforts to find a fresh approach and to restore the Club’s premier event to international pre-eminence. We hope we have done justice to all those who have been so helpful in this process”.

The event will be run by the RORC in co-operation with the Royal St George Yacht Club. There will be inshore racing followed by a Round Ireland race (approximately 710 miles).

Chairman of the ISAF Offshore Classes sub-committee, Don Genitempo commented : “The selection of the IMS 600 Class was a very wise choice by the RORC. It provides a large existing base of active yachts from which to form a team, and being a dual purpose, production yacht, entry into the class is easy and affordable. We have identified over 270 yachts eligible for inclusion. Fleets are organised in Spain, Portugal, Italy and Scandinavia – with the process underway in Germany, Holland and South America”. 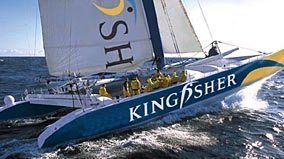