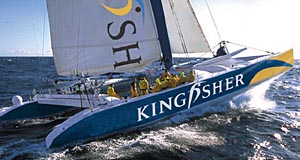 Image © Martinez/McKay
Kingfisher plc, a leading international retailer for the home, announced today at the London Boat Show that it would be continuing it’s sponsorship of Ellen MacArthur MBE with a new five-year title sponsorship deal.

Andrew Mills, Director of Corporate Affairs, explained the compelling reasons for continuing this relationship : “Ellen’s remarkable achievements over the last three years have exceeded all our expectations. We strongly believe that Ellen represents the qualities we value highly as a company - determination, skill and professionalism, combined with the ambition and ability to succeed. She is a constant inspiration to our 90,000+ employees around the globe, and we see parallels between her international ambition and our own. We are delighted to continue to support Ellen through the highs-and-lows of racing across the oceans.”

Ellen believes that she still has much to learn and is looking forward to the challenges ahead : “I intend to use the next few years to expand my knowledge and experience, both technically, personally and as part of the team. As my objectives remain focused on the multihull circuit, I do not plan to compete in the 2004 Vendée Globe, it’s a tough race to do twice in a row. However that does not mean that I have ruled it out for the future !”

Before her shift to multihulls, Ellen will race her beloved monohull Kingfisher in possibly the boat’s last serious solo race with Ellen at the helm – the 2002 Route du Rhum Route du Rhum #RouteDuRhum . This is a 3,000-mile transatlantic race against the world’s best sailors and is France’s biggest sailing event outside of the Vendée Globe, the solo round-the-word race that put Ellen and Kingfisher on the map.

The Southern Ocean will follow next Winter – this time as part of a team - with Ellen and a 12-strong crew bidding for the Jules Verne Trophy for the fastest boat around the globe, in any sailing vessel with an unspecified number of crew members. The current record Record #sailingrecord is 71 days, 14 hours, 22 mins and 8 seconds.

The programme will then build towards the ultimate trophy of success in the trimaran division of the 2006 Route du Rhum Route du Rhum #RouteDuRhum with a new 3-hulled ’Kingfisher’ launched during 2005.

Feb - April : Ellen completes her book, "Taking on the World" for publication in the Autumn.

Nick Moloney, key part of the sailing team, will compete with Bruno Peyron on his Jules Verne attempt.

May 20 : Ellen returns to France to race with Alain on Foncia in the ’Course des Phares’ (Lighthouse race) from Calais-Calais.

Plus racing on ’Kingfisher’ monohull, on the IMOCA circuit with the Offshore Challenges Sailing Team.

Building towards 2005 launch of new 60 foot trimaran ’Kingfisher3’, and full entry of the ORMA circuit, culminating with the Route du Rhum in November 2006.