Winners of Transat 650 in prototype and series divisions

The winners of Transat 650 are both SeaSailSurfers of October. Armel Tripon has won the prototype division at the helm of Moulin Roty. Erwan Tymentook the title in the series division with his Pogo 2. Both are the men of the month. 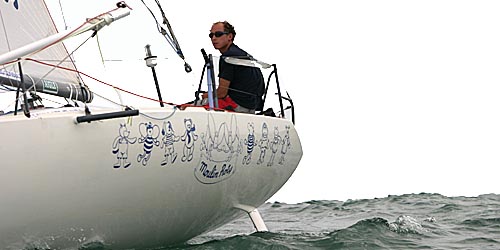 Armel and Erwan are two great sailors. They proved it by wining each one their class in Transat 650 this year. Both also benefitted from the events since the first wins the race after a hecatomb in front of him and that the other sailed on a series yacht more powerful than the majority of its adversaries. But they arrived at the end of their project and a mini project remains one of the projects most difficult to achieve in offshore sailing.

Armel Tripon had prepared a long time in advance to enter in the Mini-Transat Mini-Transat #MiniTransat . In 2001 it is already on the starting line of the transat The Transat #thetransat #ostar at the helm of Pogo 1, a one-designed yach. He finishes 11th of leg one but knows problems with his autopilot little time after the start of the second one. Two years later he is back in La Rochelle. With a prototype this time. He chose an old but powerful Finot design and appears like a serious outsider for the final podium. Besides a third places awaits him, at the three quarter of the course, Jonathan Mc Kee then Sam Manuard do break their masts. His two principal competitors out of race, Armel can finish in beauty his second Transat 650 and thus succeed Yannick Bestaven.

On his side, Erwan Tymen makes party of the hot favorites in La Rochelle in sepember. He steers one of the four Pogo 2 aligned in the serie division. Pogo 1 and other Super Calin have little chance to compete with this quartet. But the regatta proves to be intense with in David Sineau and David Raison. The three men finish in thirty minutes in Lanzarote, term of the first leg. In the second one, it is to Michel Mirabel to worry Erwan. But 10 miles of the arrival, Tymen comes again in front. Mirabel tries an option too close to ground not to let it escape and and finishes his course on the rocks of Bahia ! Erwan Tymen, the employee of the shipyard Structure can then make as well as its owner, Christian Bouroulec, in 1999 : he wins the Mini-Transat Mini-Transat #MiniTransat at the helm of the shiyard buit mini. Better, he wins the two legs, like Bestaven in 2001 in proto.

Note : special mention of the jury to Yann Riou, first on a Pogo 1 and fourth of the race.